PV Solar Energy - not all that it appears, for me at any rate

January 26, 2012
I installed a maximum sized domestic 4kw PV solar cell array on my South facing roof just before the government cut off date of 12th December 2011. I therefore qualify for the maximum Feed In Tariff of 43p per kw hour which ought to pay for my investment in about 8 years. So far so good. I do have a chimney which does interfere with some direct sunlight, and later in the day some distant trees do obstruct the sun in winter, so I am not expecting my array to produce as much as a set-up without interrupted sunlight. But I was led to expect a daily average throughout the year of 10kw hours (about 3,500 kwh per year). Our array has rarely produced more than 3 kwh in any day since 12/12/11, despite several very sunny ones. So I called Solarking, the installers (who did pull out all the stops to make sure I had  my installation up and running before the deadline. They were also extremely courteous and delivered a very tidy job). They said, "Don't worry, nobody gets much more than that in the winter months of low sun and shorter days. You'll make up the average when the sun is higher, stronger and lasts longer". Fair enough, I thought... until I received this from a friend who lives in the next county: 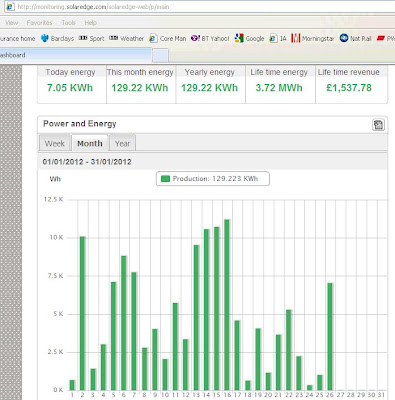 As you can see, during January he has achieved 5 days of around 10 kwh or more. In fact he is producing on his worst days the same as I produce on my best!!

I also wasn't offered the same type of web-based monitoring system that he uses, so there's another reason for a gromble...

...but come on! There must be something significantly wrong with my set-up for there to be more than twice the difference in output - even allowing for a chimney and treetops at dusk.

This posting will be tweeted to Solarking for an explanation. Sadly they don't publish an email address for ongoing support, otherwise this debate wouldn't be happening in public.