Terrorist or Freedom Fighter - Kill Him or Arm Him? 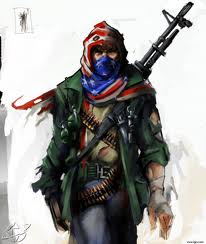 Same chap, different country, different label. Someone's hero is someone else's evil-doer. And how easily we allow our fellow countrymen (media and politicians) tell us which one's we support and which ones we need to kill. But how immensely complicated the truth really is, and how dreadful to think that we are all so easily duped to believe what we're told. Remember WMDs? Are we all too lazy in this day and age of global connectivity to really find out WHY these chaps feel compelled to put their own lives at risk? And is killing them breeding more friends or more foes? Is there a better way of defusing murderous sectarian tension without escalating it and driving it deeper under ground? Can you really kill ideas and hate?

We 'support' Freedom Fighters in Syria, but we kill Taliban in Afghanistan. We bomb North Mali separatists, but help South Somali achieve independence. Wind the clock back a few years, and we armed the Mujahideen (good guys, but now we call them Taliban (bad guys)) who were fighting the Russians (bad guys), who were also at the time killing Chechen 'Freedom Fighters' (good guys), who went on to massacre 186 children at Beslan (bad guys) who were 'rescued' by Russian soldiers post-break-up of USSR (so good guys). We've no idea who to kill and who to arm. How many of our troops in Helmand and Baghdad (we armed Iraq to fight Iran) have been shot by British and American bullets?

Ireland. Surely the British people understand who are the good guys and who are the bad. We used to hunt and kill the IRA, but now we like Sinn Fein and are disgusted by flag-besotted rioting Loyalists. Actually British troops were originally sent to N Ireland to protect the [Irish] Catholics from the [British] Protestant Loyalists - the same crazed rioters in Belfast today. So that's (1950s) pro-Protestant, anti-Catholic, then (1960s) pro-Catholic, anti-Protestant, then (1970s) pro-Protestant, anti-Catholic, then guess what (2010s) .... and the British public just sit back and feel indignant because we're told who to be indignant about.

Have you spotted a theme for all this violence yet?

Who is really the freedom fighter and who is the terrorist? Do the Syrian tribal thugs who murder women and children in sectarian massacres deserve the epithet 'Freedom Fighter'? If they win, history will forgive them. If they lose, they are terrorists and deserve to be brought to justice for committing atrocities. Or nothing will change and the West will continue to blame whoever is in charge of the screw-up country trying to keep a lid on fanatical factions. Give them all pieces of paper so they can vote who wins?... Bollocks! When did democracy and 'talking about it' keep fanatics quiet? Watch the film Green Zone (Matt Damon) about why we went to war in Iraq and the mess we made in removing the Iraqi army in order to present the Iraqi people with pieces of paper to settle their differences - Shiite vs Sunni vs Kurd.

I've just finished reading an incredibly powerful book called The Remnant. Its the story about a small number of Jews who escaped from the Nazis and hid in the forests around Kiev from where they launched attacks on the Germans. The Germans called them terrorists and hunted them mercilessly. When they found out that these highly skilled and successful partisans (actually they called themselves Guerrillas) that they had been chasing for years were Jews, they covered up the fact in order to preserve the myth that Jews were all cowards and stupid. As an aside, Hitler also tried to cover up the fact that more Jews were awarded Iron Crosses in WW1 proportionally to their population numbers than Christians. The point I'm making is that because we won WW2, they were called partisans fighting for survival. Had we lost, they were terrorists who deserved to die because they destroyed local infrastructure and made life harder not for the Germans, but for the local people, the Ukrainians - that was how the Germans span it during their occupation (or liberation as history would have claimed). "The reason you have no food or hospital equipment, is because terrorists blew up the railway. Support us in protecting you from these terrorists. And if you don't we'll assume you support them, and we'll have to kill you as well. We bring you peace and prosperity (if you just do what we say). They bring you starvation, disease and reprisals. Help us find them to bring order to your country." The book was told from the point of view of the Jews hiding for years in the forests of Kiev and witnessing the massacres at Babi Yar (where over 100,000 Jews - virtually the whole Jewish population of Kiev - were lined up and shot, while Ukrainian families picnicked on the opposite bank of the ravine to watch the fun). Sadly very few survived, and their troubles weren't over when peace finally arrived. With no homes to go back to (or Ukrainian neighbours they particularly wanted to live next to), the Jewish Remnant were the only people prevented from going to Palestine by the British. Anyone else could go, just not Jews. Preventing true refugees from going where they want to go isn't a modern phenomenon.

So why do we believe what we're being pedalled? Why do we take sides so easily? What do we really know about the people we're paying our soldiers to kill? What do they know about us?

Watch this talk by Rory Stewart that I saw at TED Global a couple of years ago.

Terrorists and tribe-haters believe passionately about something. They believe it strongly enough to kill other people's children and to die for it. And what is it that lies at the heart (and that's the word) of their determination, making them fearless (another blog post for you to read later)? Faith and Fear. Fear of divine retribution and fear for their families - stopping someone else taking their own brand of divine retribution on them. Take away that faith about bearded gods sitting on clouds, and their irrational fears will disappear. Provide their children with education. Real education, not cultural bollocks that strengthens ignorance and fairytale divisions, but sciences, philosophy (sure, learn about religions - but don't believe in it), art, engineering, construction, agriculture - anything and everything except make-believe lies and delusional deceptions designed only to perpetuate their own myths (the first five commandments for example). Anything that doesn't teach them that killing someone else is a good thing, that can be justified by their god, because you are defending him while he protects your family.

Spend those defence pounds and dollars on crushing ignorance, not in forcing people to put crosses on pieces of paper to vote for one fairy-tale instead of another. Educate their children properly. No parent will resist helping their kid to a better future, surely. Then when we all believe in what's really true and not made up by people from an age before science and the beginnings of understanding, we'll know for sure that the chap in the picture at the top really is a stupid bad guy.

If you want to stop evil, kill ignorance.