Is Child Labour a Price Worth Paying for Art?

One of the penalties Western tourists suffer by booking packaged tours (and there's no other way of sensibly and safely exploring the maelstrom that is India) is the dreaded but inescapable 'visit to the craft shop'. You never ask for these to be put on your tour schedule, but they always appear on it. One of our ever-so-friendly-hope-I-get-a-ridiculous-tip guide even cancelled some temple visit or other (mercifully perhaps) to make sure we had enough time to be assailed by his commission-paying chum in the decorated marble plate / carpet / pashmina / carved elephant / sari / jewellery or whatever flavour of 'souvenir' that particular town had decided to specialise in flogging the walking-goldmines they call tourists. It works something like this:

But you justify the purchase by saying 'I'm helping the local economy. So what if I'm paying over the odds. At least I'm doing my bit to put food on poor tables and keep an art-form alive'. Or are you...?

This video wasn't shot by me but it happened in the same shop we visited in Delhi. Different bloke, identical patter. You judge if it was likely that he was ever one of those young children he says he had been in the Kashmir village making carpets in ways taught by his grandparents, or just a well-educated salesman (no villagers we met spoke a word of English).

But so what if he didn't actually ever make a carpet. It is certainly an incredible art form, and it undoubtedly takes enormous skill and patience to achieve the delicacy and precision these carpets (or whatever the art) require. So there are three questions I want to pose:
To answer the first question, watch this (have patience where subtitles seem to have been missed off).

There's a point made towards the end of the film that there's an argument, under the circumstances of extreme poverty and a lack of practical alternative ways for families to make ends meet, for children to be permitted and even encouraged to work on looms - but never at the expense of their education (allegedly), or indeed their freedom (selling kids as indentured labourers is apparently still common, albeit illegal in India and no doubt elsewhere). It is a fundamental imperative and basic human right that every child is provided with the best possible free education in order that they can rid themselves of superstitions and be empowered to create a better future for themselves, their families, their countries and our planet. But there's also another problem. Children learn about life by playing. Forcing a child to do anything, especially repetitive and boring activities, is a form of torture or brainwashing at best. But stealing their childhood in order to maximise production, that can't be right.

But the second question about how little money filters down to those families is more problematic. The video suggested that on average a carpet can be produced for $36 per month. This probably doesn't include raw materials, especially silk, but I was being offered carpets for thousands of dollars of which only a hundred or two therefore goes to the loom workers. That's at least a 95% profit shared between the pushy seller and the guide who took us there. This of course is not a unique issue. No more than a minute proportion of the money you hand over to Tescos or your corner store ever filters down to the people at the bottom of the supply chain. Like it or not, the lion's share (or in the case of the UK, horse share) of most transactions goes to distributors and retailers, and not the manufacturer or grower. The internet is of course shortening that chain and hopefully putting more of the proceeds into the hands of the artisans. But it is more likely that online competition will force prices down rather than inflate the amount being received by growers etc. And then there's the issue of quality control. We pay a high price to ensure we're buying what we think we're buying.

One point that did emerge from the video is that it's probably not a bad idea to look out for the RugMark label (assuming it's not been forged) - unless you agree that kids should be allowed to make carpets... but then how does one know if they're also receiving schooling. Tricky. There is also the issue that genuine rugs without that mark are therefore not to be trusted - which hurts the craftsmen who made it. Accreditation is either universally applied and policed or it's potentially unfair.

Then there's the incentive for those guides and shops to be open for business at all. Without them, there's no sale, and they're all in competition with each other, so theoretically it's a buyer's market - even though the sales techniques are very pushy and you're never encouraged or assisted to shop around. Indeed who would go to a website to buy a carpet? Quite apart from needing to see one in the 'flesh', I very much doubt many of us wake up one morning and decide to buy a persian/kashmir silk carpet of a particular design and knot density. Pressure selling to high-jacked tourists must account for the vast majority of sales.

So finally there's the 'if we don't support them will the art will disappear?' question. And does it matter? That's not as stupid a question as it might seem at first glance. The internet preserves and makes available all visual art. So do the manufacturing techniques need to be preserved in human form (as opposed to video records etc), or just the artefacts themselves? Just because we no longer pay artists to paint vast religious murals as they did throughout Europe in the middle ages, doesn't mean we need to revive the skills involved. In other words, if there's no market for it, why preserve it? As long as the best of the output can be preserved and made available for the world to inspect (museums, documentaries, websites etc), surely that's sufficient. OK, so a carpet can never be fully appreciated virtually. It has to be seen in natural light, felt, experienced. As does jewellery and other 3D art. But do we really need it to still be manufactured or should we preserve the very best examples of it for people to marvel at in museums and other public places rather than hidden away in homes (and their garages), and where the sums paid for them are lining the pockets of salesmen, not families in Kashmir.

There's no question that extraordinary skill and creativity is invested in every handmade carpet, necklace and piece of decorative porcelain etc. And tourists will forever face the assault courses they unwittingly sign-up to when they take package holidays to such places. It's all part of the fun of the holiday. But if kids are going to grow up in Kashmir factories painstakingly manufacturing carpets for pressure salesmen in Delhi and Agra to flog to tourists who don't really want them, then I have a problem with the 'it will die out if we don't support it' argument. Give those kids a childhood and a future by ensuring money finds it way from tourists into education projects, not sweat shops that perpetuate the lifestyles of tourist trap operators.


But we did cave in to buy this vastly overpriced plate - about 50cm dia and £900 - which I've since seen on eBay for an awful lot less. I also have to say that this was one of the cheapest things this particular shop had to offer... ugh! Check out these bad boys. 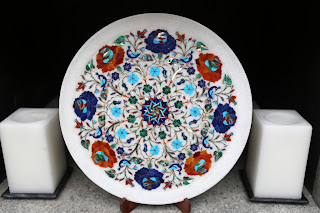