October 21, 2013
I'm still fuming about our local council deciding to close a gap a couple of years ago in the central reservation of the A3 (a dual carriageway) which linked my village Thursley to Milford. This handy cut across the opposing direction of the main road enabled the residents of my village of Thursley (and beyond) to reach our local shops, schools, doctors surgeries and train station without having to travel several miles further North on the A3 as can be seen on the map below, and then doubling back - negotiating several busy roundabouts and traffic light junctions in the process. 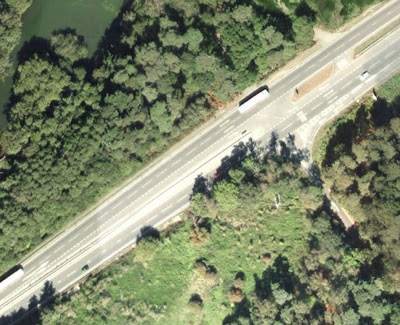 Google Maps has not been updated around here for nearly 10 years, so this image usefully shows the filter lane and the gap in the central reservation as it used to be (remember we Brits drive on the left, so the top carriageway is travelling from bottom left to top right). Today the slip lane and gap in the central reservation has gone. The filter lane is now part of a widened and continuous central reservation. To get to our neighboring village of Milford, drivers now have to drive North past it, come off at the next junction, and then drive South. Easily double the distance and more than twice the time since we now have to negotiate several busy junctions and traffic lights. 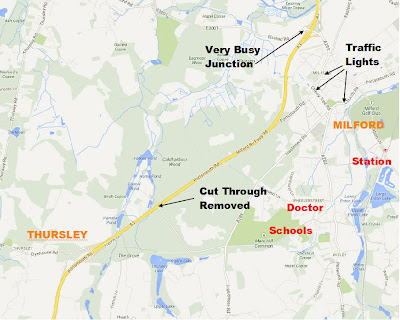 The cut-through was very handy for residents of Thursley to reach their nearest shops, schools (2), doctor surgeries (2) and train station. It not only saved time and therefore fuel, it was also, ironically, safer! Fewer miles, much less traffic. All we had to do was wait until there was a safe gap in the traffic, and then jump across the opposite carriageway into Lea Coach Road.


Thankfully we can still join the A3 Southbound at the junction with Lea Coach Road although there has been worrying talk of closing that too. The expense and interference with traffic while they were closing the junction was huge. Here's a video I made of the nonsense at the time:

But the most annoying aspect of the whole piece is that the local authorities told everyone they were closing the cut-through because it was deemed 'too dangerous'. A few years ago, we were told, there had been a fatality and they didn't, naturally, want a repeat. Fair enough, perhaps, IF it really was a dangerous junction (ignoring for the moment that we now have to travel further whilst negotiating many more dangers along the way to reach our local amenities). The reality was that we had a filter lane in which to wait for a safe gap in the oncoming traffic (so no danger of being rear-ended), and at least half a mile of straight uninterrupted Southbound carriageway to judge a safe gap in the traffic. Bizarrely, there's a sign about 400 metres ahead that says "Caution Pedestrians Crossing"!! So they're happy to encourage folks to wander across this fast road on foot, but not in a powered car.

But the closure went ahead anyway despite a mountain of correspondence from locals objecting to the plans (and none supporting it). So much for democracy. However, the final betrayal by these do-gooder, nanny-state, job's-worths was a later discovery that the all important (and tragic of course) fatality had occurred during a blizzard and at night!! Who in their right mind would have risked jumping over an oncoming carriageway in those conditions. It was simply mad driving - not unsafe roads - that caused the accident. There was just as much justification for closing the whole UK road system in case a nutter does something stupid.

So now we've spent a fortune in public funds to make life that little bit harder, more dangerous and less efficient for hundreds of British citizens, for ever. Good job you idiot civil servants.

December 09, 2019
In 1926 New York, during Prohibition, 1,200 people were poisoned by whiskey containing small quantities of wood alcohol (methanol). Around 400 died, the rest were blinded. The methanol they drank was in the moonshine they had bought illegally. In fact it had been added by law to industrial ethanol in order to make it undrinkable. Prohibition existed to protect everyone from the 'evils of the demon drink'. However, people still wanted to enjoy alcohol. So bootleggers bought cheap industrial alcohol and attempted to distill it to remove the impurities the state had added, but the process wasn't regulated. The state was inadvertently responsible for the suffering - although it was easy for them to blame the bootleggers and to justify escalating the war. This didn't stop the bootleggers. In fact it forced them to become more violent to protect their operations, and even less cautious about their production standards. Volumes of illicit alcohol, and therefore proportionat
Post a Comment
Read more