What's behind the trend to remove vwls?

February 18, 2015
What's with the current trnd to msspll wrds by tkng vwls away to create business and product names like Flikr and Tumblr? There's a crowd funding website I'm being encouraged to use, annoyingly called Crowdbnk.

I can understand making up words. Google is a good example. Story goes that Larry and Sergei thought they'd registered a word that means a large number (10 to the power of 100). But that's a Googol. So why this trend for removing vowels?

Creating names makes them memorable, easier to find internet domains for and to register as company names and trademarks. I long ago discovered using numerals to create business names like marketing4motorsport, 2nd Byte, 10ACT (pronounced tenacity!), R9 (when spelled out as rnine looks like the word mine - and therefore cost me less to buy the URL), and my latest business calls2account. But deliberately misspelling a word by leaving out vowels annoys me. It looks like a mistake. I love atention to detail. ;-)

Removing letters to create shorthand is not a modern trend. Ancient Hebrew, for example, leaves out vowels which are otherwise written as dots and dashes under consonants.

Above are several vowel possibilities applied to the B-sound 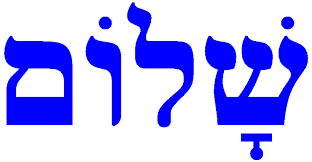 This is the word Shalom (actually it's spelled Sholome)

And here is the same word as it would have appeared in a document, especially the Torah

The Romans also used to truncate words rather than waste effort writing or carving the whole thing.

But the reason the ancient Hebrews and Romans left out vowels obviously wasn't to try to own words for internet addresses, or just to save time and wall or paper space. And I don't think it was a form of laziness. Maybe it was for a far deeper reason which might explain the current trend.

Humans need to feel part of tribes or communities. We need to belong - both for nutrition, propagation, safety and to enable us to collaborate and evolve practices and inventions with people who don't want to kill us. It's in our genes. Communities therefore need shared habits or beliefs in order to bind them together and to distinguish them from others. Creating cult words and symbols provides community cohesion. People who use them are less likely to be confused with people who don't use them. They're a sort of password or coded identity. Flags, songs, chants, languages, even tattoos can be used to unite people by distinguishing them. So just like a made up deity who's unlikely to be accidentally replicated (so the more ridiculous, the better), names for online communities can also be made up so they are totally unique, but more importantly so they develop a following who share a belonging and affinity. Their followers get it. They share the coded identity. And just as the ancient Hebrews and Romans discovered, these names still remain pronounceable even though vwls have been rmvd. You simply wouldn't have understood it if I'd written that their oe had been eoe.