She shot a man from half a mile away


I have just received this 'viral' email:

There's a Proud Papa out there somewhere. 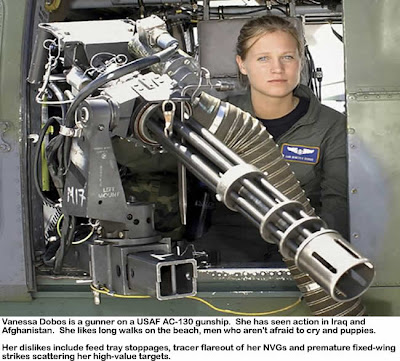 This 19 year old ex-cheerleader now an Air Force Security Forces Sniper, was watching a road in Pakistan that led to a NATO military base when she observed a man digging by the road. She engaged the target (she shot him).
It turned out he was a bomb maker for the Taliban, and he was burying an IED that was to be detonated when a U.S. patrol walked by 30 minutes later. It would have certainly killed and wounded several soldiers. The interesting fact of this story is the shot was measured at 725 yards. She shot him as he was bent over burying the bomb. The shot went through his rectum and into the bomb which detonated and he was blown to pieces. The Air Force made a motivational poster of her. (Folks, that's a shot 25 yards longer than seven football fields) and the last thing that came out of his mouth ..... was his ass!
If You Can Not Stand Behind Our Troops, please Feel Free To Stand In Front Of Them!

I'm sure the "folks" are real proud of her ass kicking skills. But whose ass? How did she know that chap was planting a bomb (odious cretin though he was) from half a mile away? Had she and her chums not been there, would he have been planting an IED? But most worryingly, how many road builders, utility workers, good citizens repairing potholes (or previous IED craters), or just chaps waiting by the side of the road will sharp-shooters and drones kill from half a mile away, or more, before they get another bomber with a 'lucky' shot? And how will we know about them?

But assuming most of her fans don't really care as long as somebody's ass is being kicked, how many more bombers will each of those 'oops kills' create?

The more the west whoops with joy and howls of laughter when blue-eyed babes and their like, fighting for god and country, make foreigners 'eat their asses', the more we anger our 'enemies', and the more enemies we create. We are fuelling their cause by perfectly demonstrating that right is better to fight and die for than might. Do we really want Miss Americas to be doing this, or should we be prouder of her had she been a nurse or a teacher working with the brothers and sisters of the man she shot?

We're beginning to treat our fighters, and especially their generals (did you read about Patraeus' huge wealth and pampered lifestyle?!), like celebrities and untouchables. Of course we need to support them and be grateful for the work they do. The weak need to be protected by the strong. That's why it's called Defence. But equally we have to be careful not to disrespect our adversaries. We're all one species and we need to learn how to live together, not celebrate brutality and callousness. Education, respect and compassion vs ignorance and amusement derived from the suffering of people we've been told are 'out to get us'.