How hard can it be to pay for something? My experience with EE

February 14, 2014
I'm truly sick of Vodafone (after having been sicker of O2). Both networks aren't networks in that a network is meant to connect things - and my phone doesn't connect to anything most of the time. Vast swathes of the UK are invisible to it, but especially the barren unpopulated wastes (not) of Surrey. My biggest gromble is about the lack of signal (3G especially) that I experience on the train between Guildford (county town of Surrey) and London - a distance of around 35 miles through some of the most densely populated parts of the planet. Wealthy too. At best you get a Vodafone signal for half the journey and perhaps only 5% of it is usable for data (ie 3G).

This independent comparison research explains why I decided to experiment with a new network, EE (Everything Everywhere), who have combined the masts of Orange and T-Mobile: 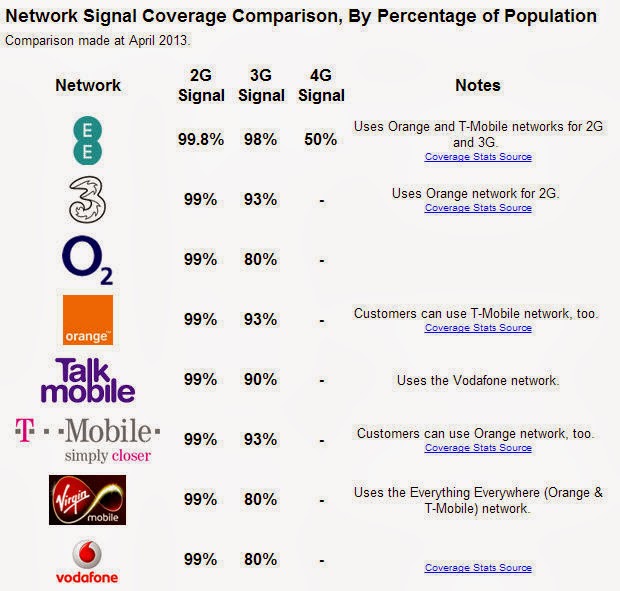 I have an iPhone 4S on a Vodafone contract which recently expired. So I'm due either an upgrade from them or I can easily move to a new network and a new phone, if I want one, without penalty. The 4S is OK for most needs, so there's no sense in paying for another iPhone. I was therefore looking for a SIM-Only deal. But first I wanted to make sure I wasn't yet again jumping from frying pan into fire.

EE's website offered a free-SIM. Just fill in a form with name and address, and you'll get a couple of 'top-up' SIMs posted to you to try them out. They arrived the next day. I also discovered that there's a hidden page on the Vodafone website to request for your phone to be 'unlocked' (ie enabling it to use a SIM from another network). Needless to say that didn't work. Vodafone are in a hopeless mess as far as my company account is concerned, so I wasn't surprised this automated route failed. But what always does seem to work with them is speaking to a human... if you can find the right number to call, and are prepared for endless horrid IVR menus - usually ending in oblivion... deep breath, try again. Finally I spoke to a friendly voice and got my phone 'unlocked' (via itunes oddly). I could now pop an EE SIM into it and use it like a proper phone... well almost...

I got a signal!! 5 bars no less. And 3G most places I tried it - including for the WHOLE of my train journey. Bliss...ish. Although I could see the signal strength, I couldn't use it until I put credit on the SIM.

So I went to the web address they gave me in the letter that arrived with the SIM to top it up with credit. After many many attempts to give them my credit card details, the system kept crashing, doing nothing, or, weirdly, confirming that I couldn't top up because I already had maximum credit of £0 on the account.

Could I find a number to call to speak to a human. Oh no. There simply isn't one. There are helpline numbers, but all you get are endless automated IVR services. There is no way to speak to a human to explain my problem with their frustrating nonsense system. Don't you just love screaming profanities at IVR systems! By the way, did you know that these are recorded. I know of a company who offers a service to analyse customer experiences by listening to such recordings. Evidently EE don't use them. Or maybe they do, just that this outfit can't speak to anyone there about the results.

So I downloaded  the EE app in the hope that having tried every other way to give them money, this might work. The app recognised everything, went online, and then said 'You can't top up because there's no money in your account'. Huh?! I'm already bald, but if I hadn't been, clumps of my hair would have surrounded my chair by now. No clues in the app either as to how I can contact anyone to get out of this impossible loop... You can't add money until you add money.

Imagine my frustration. Having at last found a network operator who knew how to make my phone work, I couldn't use them because the idiots won't let me pay! DO NOT buy shares in EE.

Finally I went into an EE shop. The weary looking chap there took my phone and asked if it was an EE SIM. I said yes and he said "We don't do top ups for EE SIMs here". WHAT! The shop was plastered with EE logos. It was painted pale green - the EE colours. He and his gonky assistant were wearing EE branded shirts. "It's new and we can't do it yet. If you were with Orange or T-Mobile, no problem. Here's a number to call. They might be able to help". "A human?" I asked, timidly. "If you can find the route through the IVR, it might be possible", he suggested.

My legendary patience was once again being tested to its extreme. So having put the Vodafone SIM back in the phone (fiddly business with tiny little bits of plastic), I called the number. On the third experiment with an IVR 'press 1 for...' combination, I finally, oh yes, spoke to a human! Inevitably he was at an Indian call centre. To be honest, I was relieved. I've always found the chaps at Indian call centres to be vastly more competent and intelligent than many local call centres. I guess you need PhDs and the like to stand a chance of working in one there. Good luck to them all, I say. Anyway, the chap explained that there is a glitch in their idiot system which means I need to register my card with them manually first before I can use it... and that there's no way of doing this other than by calling him... who is INCREDIBLY difficult to find. The number I had been given in the shop was written on a scrap of paper - not even printed for other poor souls like me - and was not an 08-style call centre number. If you need it, it's +44 (0)1707 315000. Gold-dust info from Grombler. Just Google 'Amazed EE are still trading' and you'll find my blog again should you need it.

So Everything Everywhere evidently doesn't include paying, speaking to humans, or buying their products from their shops. But it does finally mean that I can type this on my phone on a train. #gettingthere #sigh.