I Hate iTunes for Apps - but it could easily be better

March 20, 2012
If you've got an iJobs, you've got to use iTunes. He's a genius, and we're all twats for buying his stuff and ensuring we're stuck with his software bollocks that now controls our lives. In particular iTunes (and all the IOS crap his ghost infects our 'soon-to-be-bricks' with).

Now iTunes does a couple of things fairly well (although there are no doubt vast numbers of examples out there that do all of these infinitely better, but I'm too busy writing stuff no-one reads to waste my life investigating them). iTunes enables you get stuff you know exists. And it automatically updates stuff you want to be kept updated, like podcasts (we used to call them recordings) and app releases.

What it is truly shit at doing is helping you find an app that does something you need.

It could be so much better if it took a leaf or two out of Amazon or Ebay's books. But in iTunes there's virtually no index. The closest you can get down to is this: 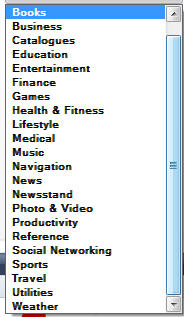 and then when you select, say, Utilities you get offered:

New (and Noteworthy in Games): What merit has something got just by being New? Are there really sad people out there who watch iTunes Utilities New just to monitor what somebody else has added that minute or that day? And who decides what's Noteworthy in Games?

What's Hot: These are 120 'selected' apps in each category. There is no explanation as to what constitutes 'Hot'. If it's aimed at 16-year-olds, it's definitely not Hot for me. In fact it does seem to be aimed at 16-year-olds, so all normal humans should avoid this section. Indeed the only 'sort' function offered is 'Featured' or 'Name'. So what, oh little Jobbies, does 'Featured' mean? Am I being too cynical to assume it means 'who has paid most' - like Google Adwords?

And then there's the only other place you're likely to find what you want, called: All Utility iPhone Apps of which there are currently a nicely-scrollable (not) 16,042 to look through. Here you can sort by 'Paid' or 'Free'. Not much help there then, since if I find the app I need, I won't mind paying a couple of bob for it (but only if it's well rated of course). You can also sort by Release Date (why on earth would you ever want to sort by this? - see New above), or Name. There is very rarely any relationship between the name of any app and what it does, quite apart from the idea that if it does have a relationship, there's little chance that the first word of an app's name matches both the minds of the creator and their target customers. And even if by coincidence it does, Apple doesn't allow two apps to have the same name, so the creators are forced to pick alternative words.

Of course you can use the Search box at the top of iTunes. This will not only search names, but also descriptions (and that's good). But what's not good is that it doesn't let you filter by type of app, let alone whether it's an app at all. You get all songs, books, videos and whatever including those words. OK, you can then see all apps, but then you get a huge randomly sorted list (see above).

So if you're very lucky, you find one to pick that might fit the bill. You then have to open it up to check whether it does what you hope, and then you discover from user reviews that you shouldn't touch it with a barge pole.

Now iJobs has a problem here. In order to get feedback, they need people to try stuff first. And if you only download apps that are highly rated, new ones that deserve to flourish, never get tried and then never get to the top of the pile. So it's important to iJobs that what is effectively their social network acts as testers for the good of everyone. But that's bad news both for the testers and the rest of us whom iJobs is encouraging to become testers by restricting our view of what's good and what's bad. It's a vicious circle. You can't sort by reviews, because most apps won't then get a review and the better ones will remain even more hidden than they are today.

All of which means - you can't find what might be both useful and well rated unless you are a) very lucky, or b) have the patience to trawl through every possible word that might by chance have been used by the creator, and then open up each app description to find out what people think about it, or c) take a chance on an app that hasn't yet been reviewed. And nobody likes to be a pioneer. Who's got time to waste crashing their iPhone?

So, little Jobbies. This is what we need you to do to iTunes.