March 24, 2012
Over 18 minutes of the 80 minute international between Wales and Scotland this year was taken up by scrums. There were probably only a dozen or so of them, but they kept breaking down and having to be reset. In monetary terms, a ticket costs £80 - that's £18 per person x 80,000 at Twickenham = about £1.5m that rugby fans paid the RFU to watch failed scrums in that match - and that doesn't include Sky subscriptions etc. Unfortunately this has become a regular feature of the professional game, and is exceptionally boring for spectators. Unfortunately it's also impossible for most people, other than perhaps the front row of the packs, but certainly including the referee and touch judges, to know what is going wrong. Generally the referee will get bored and award a random penalty to one side or the other in the hope that it will 'encourage les autres' and show he means business. This might then result in a team gaining 3 points for fictitious reasons with a 50% probability of them being awarded against the wrong side. It's boring, it's unfair and it's also potentially dangerous since collapsing scrums are responsible for many a damaged neck - or worse. Scrums should be safe and quick. They should never need to be re-set for another bone-crunching attempt to get it right.

And while I'm having a gromble, referees call Crouch, Touch, Pause, Engage... but in fact only three of these are instructions. Pause is a statement of what's actually happening between Touching and Engaging. The referee isn't actually instructing anyone to do anything other than wait - which is what they would be doing anyway after they Touch and before they hear Engage. I don't think it's a problem, just a bit daft.

So what to do about the increasingly common scrum breakdowns. Most people would agree that the scrums, when steady and well set, are a great test of players. They also keep over half of each team occupied in one small area of the pitch so that when the ball emerges, the backs have more chance of breaking through the opposition's rarified defence - and the forwards have to quickly scatter across the pitch to strengthen the defence or the attack. Flankers also play a vital part in both the defence and attack since they break fastest from the scrum to become extra backs.

So we want to keep scrums, but we urgently need a way to make them more stable and less likely to waste time re-setting or resulting in random penalties. We also want to make rugby safer. Only specially trained players are allowed to play in the front row. When there aren't enough front row forwards available for a scrum, we are left with the ridiculous spectacle of 'unopposed' scrums - which are pretty pointless.

Apart from losing footing, broadly speaking there a four reasons why a scrum can collapse and need to be re-set. Poor binding by any of the front row; driving inwards instead of square and straight; deliberately bringing the scrum down; and one Prop (aided by his 2nd Row and Flanker) backing off to make the opposite Prop fall forwards. All four offences are punishable by penalties, and all four are usually hard to determine who has caused the problem. Professional front row forwards know many tricks to make it seem as though their opposite number has committed an offence. So what we need is a more stable structure.

Currently this is what a scrum looks like from above (although the No. 8 at the back can choose which gap to pack into): 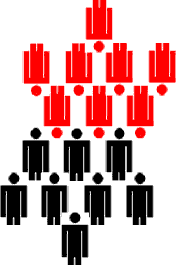 Because there are only 3 front row forwards packing onto 3 opponents, instability is guaranteed by the fact that one third of the participants only push against one shoulder - and because of the geometry of 3 vs 3, this happens on opposite ends of the connection. There's therefore not only instability because of the ease with which it can wheel, you've also got two people trying to push in a straight line with a single shoulder. In fact it's a wonder that any scrum holds together and doesn't instantly wheel when the shove begins. Added to this is that it is the job of the Loose-head Prop to try to lift his opponent in order to give his Hooker a good look at the ball being introduced. The Tight-head, on the other hand, is trying to do the opposite.

I'm not sure this would work, but if the scrum had one more person in the front row (ie two Hookers), it would be harder for the scrum to wheel, for it to collapse or for a player to drive inwards and have much effect. 4 on 4 is more rigid and therefore better balanced. Using the arrangement below, you would also have no other loose forwards. This would increase stability, but it would also radically alter the job of the Flankers. The No. 8 would be no different from today except he would have one less 'channel' to choose from. 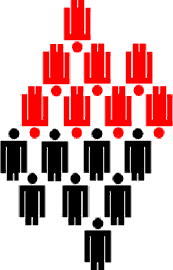 But you could also arrange them like this to preserve the flankers: 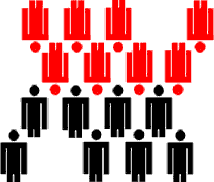 The No. 8 has disappeared (he's now a 2nd Row), but by ensuring that 2nd Rows only shove front row forwards who have both shoulders stably opposed (in other words they can't shove loose props), it would result in a more stable structure. In fact all you've done in this arrangement is to move a 2nd Row player into the front row to create an extra Hooker.

I would be very easy for the IRB to experiment for an hour or two just to see whether my ideas have any value. I am sure even if they do result in more stable scrums, there will be a range of additional issues that I haven't thought of which might negate the idea - quite apart from indignant No. 8s the world over seeing their role disappear - and of course 2 Hookers having to resolve duplication complications. But if the IRB don't sort out the scrum, fans will start voting with their feet. Nearly a quarter of the Wales Scotland game was lost to this nonsense. Let's not wait for it to become even worse.